Video: Everything You need To Know About Progressive Web Apps

The following video is a webinar with Corra’s CTO, and CTO and founder of Webscale.
﹏

Watch on demand: chief technology officers from Corra and Webscale take a deep dive into the technical side of Progressive Web Apps (PWA). Luigi Iuliano, CTO at Corra, and Jay Smith, CTO and Founder at Webscale, discuss how PWAs differ from traditional mobile apps, what types of retailers will benefit from them, and how and where to start your process. 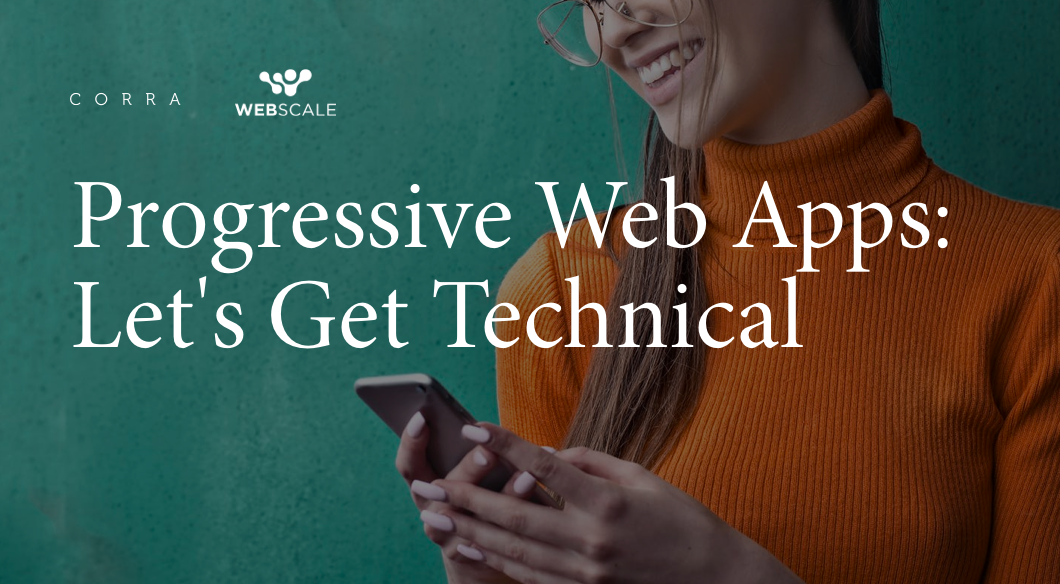 How Progressive Web Apps (PWAs) can change your online business

Corra CTO and Jay Smith, a former master inventor at IBM and current CTO and founder at Webscale, discuss PWAs vs. traditional and native apps, plus answer burning questions on best practices for building and maintaining PWA storefronts.

Watch the video or scroll down to read the Q&A highlights below:

Q: How does a PWA differ from a traditional ecommerce app?

A: PWAs combine traditional website capabilities with the best features of mobile apps. But, unlike mobile apps, they don’t have to be downloaded. As visitors browse the site, they receive a simple prompt to add it to their home screen. Once they accept, the PWA appears on their home page as if it was a native app. The experience will also feel like a real app, with hidden navigation and mobile-first design.

Q: How do PWAs differ from native apps?

Q: How do mobile apps compare to PWAs in cost, maintenance, and performance on different browsers?

A: PWA’s are more cost effective because they are universal. Native mobile apps require development across multiple systems, Android and iOS, while a PWA is developed once and then is usable on every device. Mobile apps have more maintenance costs and labor because there is more development necessary. PWA’s are also SEO optimized so they create higher conversion rates and traffic, while mobile apps are not SEO optimized.

Q: How do PWA’s interact with the shift towards buy online pick up in store (BOPIS)?

A: Ecommerce is growing exponentially, but there’s been a functionality change in that consumers want the option of BOPIS (there’s been approximately a 260% increase in BOPIS). BOPIS is now a must have. Investing in a PWA makes it easy to optimize the experience for BOPIS and other unique ecommerce approaches when using mobile devices.

Q: What is the business value torwards adopting PWAs?

A: Business of all kinds use PWA’s as their digital platforms. There are mountains of statistics that suggest PWA’s are effective at creating higher conversion rates, implementing faster page loading times, increasing average time spent on sites, and putting more items in customer’s carts than a traditional responsive website. These are key performance indicators that businesses wants to increase.

Q: What reasons might deter a business from implementing PWA?

A: People are resistant to change, and PWA’s being a new technology means that a little change is necessary. However, once people get into the details of developing a PWA, it becomes clear that a lot of the necessary skills are already in-house. PWA’s require use of Javascript, CSS, and HTML, which are basic tools that everyone developing websites is familiar with.

Q: How long does it take to implement a PWA?

A: The length of time to implement a PWA is dependent on how much backend work is associated with the implementation. A PWA implementation with the same creative is achievable in roughly three months. At Corra, we’ve built an accelerator that prioritizes PWA’s in the ecommerce space. It allows us to provide robust turnkey features, integrations, and a variety of sophisticated functionalities that ecommerce partners want and need. Corra’s accelerator allows minimum effort for implementation.

Q: What should merchants be aware of when starting a project?

A: Having a strong development partner who understands ecommerce retail and the PWA philosophy is a must. Building a relationship with a hosting partner who also understands PWA technology stack as well as multi-level cache optimization is also very important. Corra has the resources to maintain both of these types of partnerships.

Q: What are some key indicators that show the PWA is going in the right direction?

A: The key indicator is the client’s first reaction when they engage with the new PWA. The overwhelming response when PWA’s go live is appreciation for the speed of the new interface. Clients are accustomed to a certain level of manual navigation and performance with responsive sites, as opposed to the PWA which allows for lightning fast content retrieval and navigation.

Q: What is a successful PWA project?

A: A successful project is one that demonstrates the upgraded functionality of a PWA over a responsive site. Corra launched Elemis, which is a B2C site and a wonderful PWA. It runs on Magento with Corra’s accelerator technology and provides multi-store capability. The promise of faster page load times has not only been met, but exceeded expectations. Corra also recently worked with Jomashop. They’re a large ecommerce brand who wanted to move from M1 to M2, and Corra helped them upgrade to a PWA as well. Their PWA loads pages in under two seconds and they have a massive catalog. This exponential decrease in load time indicates a successful PWA project.

Report: The Future of Mobile Commerce

For 20 years our strategists, engineers, and UX designers have been building leading-edge ecommerce sites. From the cloud to the edge, we’ll help you make smart decisions and speed time-to-value, whether you’re building from scratch or moving to a new platform.