Every company and brand out there is fighting to stand out and attract their target audience to gain market share. In order to do so, they are creating and distributing content in various formats like never before. Current research suggests that due to the abundance of available information across channels, a modern person’s attention span has become paper thin and hovers somewhere around 8 seconds, thus making it difficult for brands to grab their attention.

In the midst of a plenitude of content, visual content is growing exponentially in both importance and prevalence. And why shouldn’t it, right?

Visual content like photos, infographics, illustrations, and GIFs are a core asset to showcase your brand story in a compelling manner. Also it is a simple, cost effective and direct way to engage your audience.

Humans absorb and process visuals 60,000 times faster than text. While text-based content is always going to be an integral part of marketing, in order to really stand out, brands must incorporate visual content in their marketing efforts.

When GIFs arrived, they put everyone into a frenzy and got instant recognition for their motion capability and novelty. It provided marketers an easy and effective way to grab attention and at the same time showcase their products’ functionality in a much better way. However, lately the efficacy of GIFs is declining due its overuse.

To break this GIF deadlock and make it effective again, creative minds collaborated and came up with the great idea of making a few parts of the image movable as opposed to entirely moving GIFs. They also coined a term to describe these modernized images: “Cinemagraphs.” While there is nothing groundbreaking with the technicality of cinemagraphs, the fact that it brings certain parts of a photo to life makes it unique and a charmer in its own sense.

Cinemagraphs are a perfect tool for running campaigns or advertisements because of the high amount of visuals used in the process. A photograph alone might not be enough to grab a viewer’s attention unless it’s very special. Videos on the other hand require time commitment from viewers, which is not always guaranteed.

Cinemagraphs are a well balanced mixture of both mediums, making it unique enough to stand out and brief and easy enough to process, allowing people pause and take a look without being intrusive. This Panasonic banner ad is a great example of cinemagraphs, generating more click through than the company’s ads that used still photos.

A Progress GIF is a great way to make traditional GIFs more compelling. As the name suggests, it shows the progression or transformation of particular things over a period of time. This could be over the years, through different stages, under different conditions, and much more.

There are endless ways to use Progress GIFs. You can choose to show how a product has developed over the years, create a collage highlighting important milestones that shaped the fate of your brand, or create a sense of longing with popular or nostalgic long-running ads and other marketing campaigns.

Progress GIFs can be as vivid as the creator’s imagination. eBay Motors used a Progress GIF to illustrate a car morphing into various models, demonstrating how products and people’s preferences have changed over the decades.

Infographics share a similar fate as GIFs. They were welcomed with huge excitement and open arms, and saw a huge boom as their visual elements made it easier to digest and process large chunks of data with less effort and time. One more reason why infographics enjoyed such wide acceptance was because they broke the monotony of text.

But just like GIFs, the overuse of infographics made them prone to neglect and often rendered them ineffective. Recently however, infographics found a much needed rejuvenation by mixing various forms of media into them, such as animations, motions, smart art, and more.

The above infographic, although being in a visual format, is an excellent illustration of several other mediums including moving pieces and animations. This mixed-media infographic not only grabs your attention with moving pieces combined with static images, but also prompts you to pause a bit longer to enjoy its creativity.

Data visualizations include charts, maps, diagrams, graphs, heat-maps and so on. If you ensure that your graphs are informative, educational and easy to understand, it helps boost their chances of going viral.

Data visualization enables you to align your brand-related data, findings and imagery to exhibit facts, trends and projections.

You can easily break down complex raw data into consumable information with data visualization. You can share your research findings depicting human psychology, customer buying behavior, brand preferences or product affinity according to demographics, trends forecast, and much more.

40% of people understand and respond better to visual data as opposed to plain text. Oxford noticed the growth of this content form and proclaimed it as “Word of the Year” in 2015. 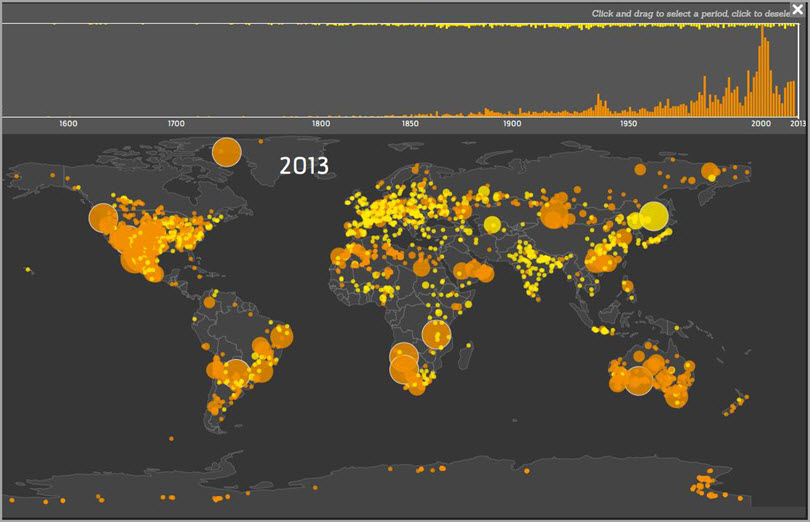 The above image exhibits a data visualization of number of recorded meteorites over time.

Attracting your target audience’s attention amongst all the noise is difficult, and it will only get harder. But technological advancements have augmented creativity and innovation, giving rise to new tools and platforms that amplify the way you communicate with your end consumers.

The above examples demonstrate the fact that marketers should always keep their eyes open for upcoming trends and be ready to accommodate disruptive tools, maneuvering strategically to gain competitive advantage.

Thanks to our partners at Social Annex for providing this content. For more from Social Annex, check out their blog or visit SocialAnnex.com.

Sasha Butkovich is Communications Marketing Manager at Corra. Managing the agency's communication, branding, PR and social strategies, Sasha focuses on developing engaging content for decision makers in the digital commerce industry. Sasha brings a background in copywriting and over five years in ecommerce marketing to her role at Corra.